The CBS grad ('96) and fund Managing Partner discusses the people, experiences, and ideas that drive his vision.

There are likely few Columbia University graduates more passionate about the institution than Rob Bibow.

This sounds like hyperbole, sure, but hear us out: aside from graduating from the Business School in 1996, Rob credits Columbia with his actual existence. His parents met there while studying at Columbia, so in a certain sense, he would not be here if it were not for the school. Moreover, his uncle attended Columbia and his great grandfather graduated from the law school in the 1890s. Columbia University is core to his identity.

No wonder, then, that Rob recently took the helm at Fission Ventures, where as Managing Partner he raises venture capital funds that are exclusive for Columbia alums. 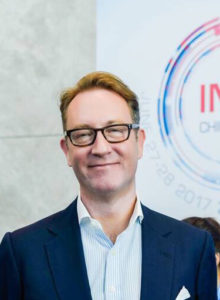 Under the aegis of Alumni Ventures Group, Fission’s parent company, Rob is able to offer both retail and institutional investors access to the most competitive deals across the venture spectrum and at a far lower minimum than was previously on offer. Rob has 30 years of finance experience, 15 of which were spent in VC, so he more than most grasps the opportunity that Fission presents his fellow “classmates.”

Moreover, Rob and Principal Marco Casas (CBS ’17) are both alumni who regularly engage with Columbia entrepreneurs looking to build their businesses. They deeply enjoy helping fellow alumni enhance their prospects of success.

Below, Rob shares more about his path to Fission, what it takes to be a good venture investor, and the scholarly upbringing that spurred his vision of leadership.

What do you love most about your alma mater?

On one hand, I love Columbia because it’s among the most international universities in the world. My class was filled with people from everywhere and that was an education in itself. I still keep in touch with classmates whom I met almost 20 years ago, even though some are living as far away as China.

On the other hand, I also love the fact that Columbia is very much a product of New York City. Many business-minded Columbia students know that the world’s largest stock market and the headquarters of some of America’s biggest companies are only a short subway ride away. People don’t just come from around the world to attend Columbia; they also come to be in New York City. This combination of being close to the action but also very international is what makes Columbia unique to me.

Tell us about your professional background. How did you land in VC?

I’ve worked in finance for nearly 30 years. The first 15 were spent as a banker with Goldman Sachs, UBS, Deutsche Bank and BAML, where I was given broad exposure to the world of finance at the highest levels and the skills to understand business. The second half of my career has been spent putting those experiences and skills to work in VC.

I landed in VC somewhat by accident. I was sailing offshore with a friend, who is a successful entrepreneur, and he asked if I would like to work at his VC firm. I joined him shortly thereafter, and the experience helped set the foundation for much of what I know today about venture capital. Finance is an apprenticeship business, and there is no better apprenticeship than working on Wall Street and then putting that skill set to work for a successful entrepreneur. I was quite fortunate to have the opportunity to work for several other successful entrepreneurs and then as a partner in a large VC firm. Each one of those experiences helped me become a better investor.

What sparked your interest in working for Fission?

Columbia University changed my life, as well as the lives of many generations of my family. This long family connection with the university is very important to me.

Which venture trends are you most excited about?

The trend that most excites me at the moment is Artificial Intelligence. I have heard people liken it to the invention of the steam or internal combustion engines. The application of AI technology, like engine technology, will fundamentally transform entire industries, eliminating laborious, repetitive jobs that were formally done by humans and replacing those jobs with ones that are more rewarding.

What are the three most important lessons you’ve learned in VC?

1. Understand the risks. It is not difficult to figure out why a company will be successful, but there is no reward without risk. So our job is to figure out the risks as best we can and judge whether the risks are worth taking. And remember, if you don’t take any risk, you won’t make any money.

2. Ask everybody. Be open-minded, speak to as many well-informed people as possible, and read as much as you can about any technology or deal you are looking at. The more people you speak to, the more informed you will become. Try to speak to a potential target company’s customers and competitors. You will learn a lot. You may end up investing in the competitor instead.

3. Be bold. The world 10 years from now will look very different than it does today. Ten years ago, almost nobody thought we would be ordering taxis on our phones, or that those taxis would be people’s private cars. Now we know that our children will probably never stand on a corner waving for a taxi as we all once did. Our job is to try to peek over the horizon of time and figure out what logically must happen, given what we know today. Good VC investors look into the future and invest in it boldly.

Which resources or sources of inspiration (podcasts, books, blogs, mentors, etc.) are most useful to you on a regular basis?

I grew up in a household where, aside from tennis, we never watched or discussed professional sports. Instead, we discussed business, politics, and current affairs. In a non-spiritual sense, I take inspiration from business and political leaders who have both vision and conviction, and whom I fundamentally believe in.

To give you a concrete example, I was recently on the phone with a tech entrepreneur who, in 2018, sold a business he’d been building for more than a decade in order to work on a technology he really believes in. He gave up what would seemingly be a guaranteed future in order to focus his entire energy on developing a technology that could change the business world. I was inspired by his vision, courage, and conviction. He is seeing significant early success, so we’re even looking at his company as a potential investment.

I was born in Sweden and have spent my entire life traveling. I have lived and worked in the U.S., Europe, the Middle East, and Asia, and I speak a number of languages. This global experience is an important filter for me when I look at companies because technology does not generally recognize borders. These days, more than ever, technologies and companies need to be judged in a global context.

Fission Ventures is a private, for-profit fund that’s unaffiliated with Columbia University. Fission provides Columbia alumni investors with a diverse portfolio of 20–30 deals, many of which are connected to fellow alums. Visit Fission’s website to learn more.

As Principal at Chestnut Street Ventures, Jonathan Meltzer is responsible for sourcing, evaluating,...