EP 3: A Founder on a Crusade to Change Big Pharma

When the specialty drug prescription process delayed access to medication that her little brother desperately needed, Zoe Barry took on the system with a “bet the farm” move that could affect millions. (Listen) 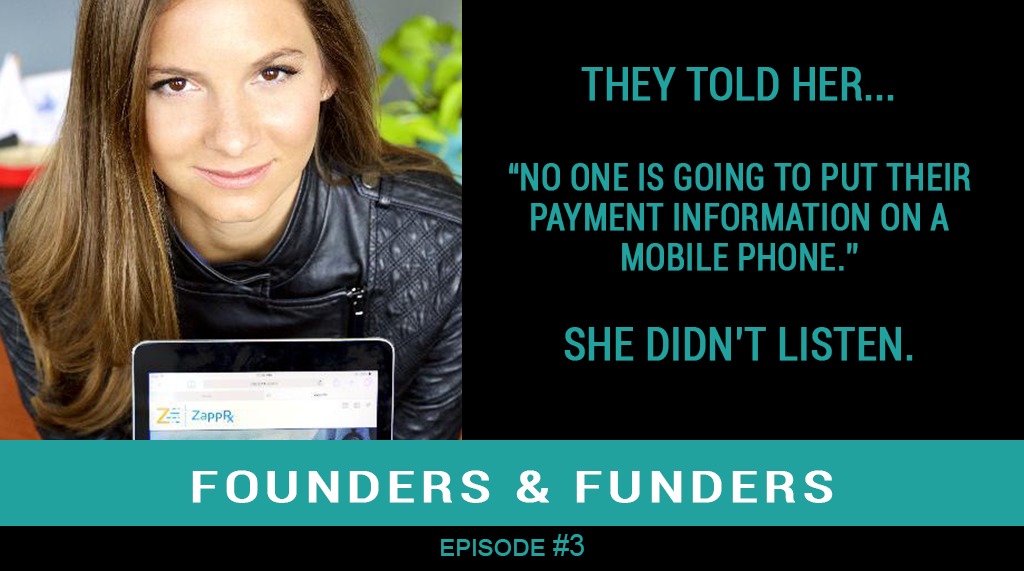 Episode Summary: Zoe Barry’s founder story is a vivid example of how a life experience can make a future founder uniquely qualified to tackle and solve a particular problem.

When her younger brother was diagnosed with severe epilepsy and needed a specialty drug (fast), Zoe could not believe the steps that her family had to take to get the much-needed prescription. Though every minute her brother went without the medication put him at risk for another brain-damaging seizure, the family still had to painstakingly walk through an antiquated, labor-intensive approval process involving the doctor, the health insurance company, and the pharmaceutical company. Frustrated by this experience, Zoe decided to take on the system in classic “big sister” fashion.

Many people told her that the mountain she intended to climb was too steep and not worth the effort, but Zoe founded ZappRx and is proving everybody wrong.

Subscribe to Founders and Funders on iTunes, Stitcher and Android Podcast Players.

Zoe Barry is the founder and CEO of ZappRx, a digital health company that is modernizing and simplifying the way specialty medications are accessed. Zoe launched her career on Wall Street, then later joined athenahealth after her youngest brother was diagnosed with severe epilepsy and needed specialized care and therapy. Determined to make a difference in healthcare, she focused on implementing athenaClinicals at provider practices.

After her family experienced firsthand the inefficiencies that plague specialty drug prescribing, Zoe became inspired to launch ZappRx in 2012. Since founding ZappRx, she has raised $42 million in funding.

In addition to ZappRx, Zoe is passionate about helping founders launch startup companies. She currently advises three startups, including MyLingo (LA), Remy (NYC), and Metiri (Boston) and she’s invested in FutureFuel and PIXI.

Zoe is also involved with The Yard Ventures, the Harvard alum-led fund under Alumni Ventures Group. As a Columbia grad, she’s also been influential in helping AVG get their Fission Ventures fund up and running.

One of the most amazing things about this founder story is that Zoe Barry, founder of ZappRx, is fighting someone else’s battle. When her little brother was diagnosed with severe epilepsy and could not quickly gain access to the specialty drugs needed to avoid another potentially brain-damaging seizure, the entire family lived in daily fear that he would have an episode before the prescription finally got approved—six months later.

As her parents fought the system—repeatedly talking to doctors, pharmacists, and insurance company—a fire grew in Zoe that she could not ignore. Though her brother eventually received the treatment he needed, this big sister went on a crusade to make sure that nobody else had to endure the same frustrations. That fire turned into a business with the potential to change how specialty drugs (and eventually all prescription drugs) are accessed.

In 2012, when ZappRx was in the idea phase, people that she very much respected told Zoe that her idea was too big. They suggested she work in the healthcare industry instead and see if she could make smaller changes from within the system. Though she initially accepted that advice, it didn’t take long for her to quit her job and rise once again to the challenge. Here are three of the many things that led to her success:

As you listen to Zoe tell the story of how she founded ZappRx and raised $42M in investments (to date), keep in mind that nearly everybody she talked to in the early stages of development told her that the business would never work. This is what she said led to her success:

After quitting her job, Zoe immersed herself in the startup ecosystem in Boston. Colleagues invited her to the MIT offices, where she learned about patent frames and claims. She got connected to the Cambridge Innovation Center, where she attended free seminars and went to the Venture Café to learn about pitch decks, term sheets, and more. It’s here that she learned about venture capital.

2. A unique approach to pitching

Rather than initially approaching her top choice of investors, Zoe first pitched ZappRx to companies that she did not believe would be a good fit. She repeated this process, improving her delivery, and learning from the objections until she finally got an audience with her “A-list” investors. With a solid understanding of the process and having learned from the many previous meetings, Zoe landed the funding she desired from the partner she deemed the best fit.

In preparing to launch the pilot for ZappRx, the team learned that the initial idea would not work. In being willing to honestly evaluate the situation and retreat as needed, the team discovered a larger market potential with a bigger opportunity. Zoe refers to this as a “bet the company” move that should never be taken lightly.

This once competitive gymnast, swimmer, and sailor (and now race car driver) would not listen. She had a gut instinct that the world was going mobile and someone would combine prescription and payment information in an app. “It was going to be me,” said the eventual founder of a successful Series B startup.

Sign up for the AVG newsletter to get up-to-date information on all of our funds and be part of our unique investment community.

Founders and Funders is a podcast where we discuss how entrepreneurs and investors work together to build great new companies. Our guests, many of whom are connected with AVG as entrepreneurs, investors, managing partners, fellows and more, are invited here to talk about the journey of building companies from incubation to early stage investing and beyond.