EP 11: How Penn Alumni Are Profiting from Venture Capital

For this venture capitalist, connecting with former Penn classmates is more than just a social occasion. She helps Penn alumni invest in great businesses founded by fellow Penn graduates. (Listen) 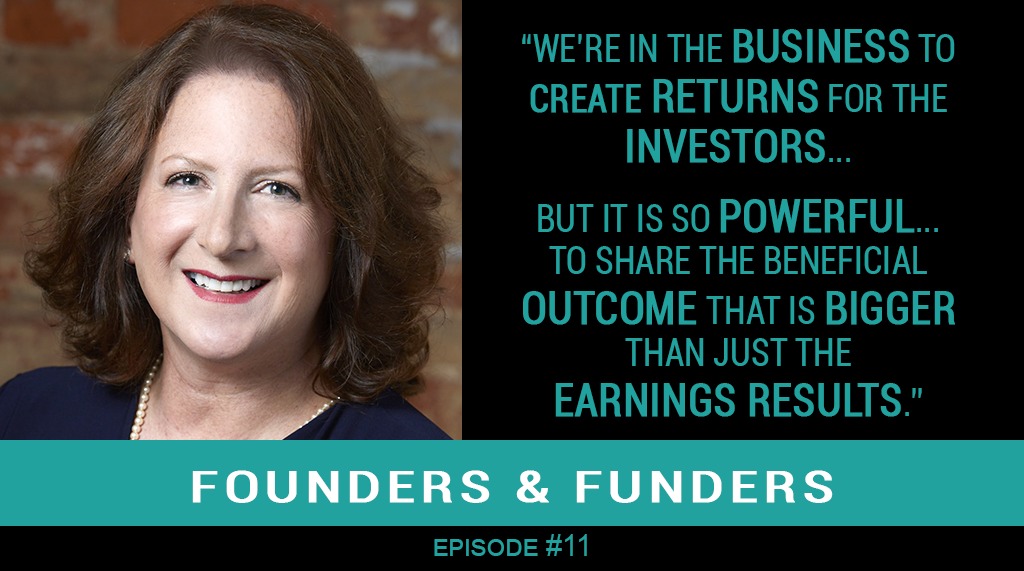 Episode Summary: When Gail Gilbert Ball enrolled in the University of Pennsylvania, she didn’t know which field of study would hold her interest. She tried a few different areas before finding her passion in a newly introduced major called “econometrics.” Now, years later, she is on the forefront of another new era, enabling Penn alumni to participate in an asset class they have traditionally not been able to access.

As the founder and Managing Partner of Chestnut Street Ventures, Gail connects with Penn graduates to offer simple access to venture capital investing, to help build (and profit from) new businesses connected to fellow Penn alumni, and to support the entrepreneurial ecosystem of their shared alma mater. Gail’s role reflects her deep affinity for a school and community that launched her career, as well as a lifetime fascination about how to effectively put money to work.

Gail Gilbert Ball has held decision-making posts at nearly every seat around the financial services table. She’s served as a banking executive, regulator, service provider, and board member—in both for-profit and social-impact markets.

She most recently served as a Chief Operating Officer of The Bancorp Bank and filled other executive roles at PNC, Chase, Capital One, and NCO Financial Systems. Moreover, Gail headed the Payments Studies Group at the Federal Reserve Bank of Richmond and served as Board Member and Risk Committee Chair at Kompanion, Inc., one of Central Asia’s largest microfinance institutions.

Gail has a Bachelors of Science degree in Economics, Finance and Statistics from Wharton (‘79). She is also the founder and Managing Partner of Chestnut Street Ventures (CSV), a venture capital fund serving Penn alumni investors and entrepreneurs — all under the Alumni Ventures Group (AVG) umbrella.

Gail’s position as Founder and Managing Partner of Chestnut Street Ventures represents the perfect intersection of two passions she has nurtured throughout her career — a love of finance and a desire to stay connected with her alma mater.

Gail went to the University of Pennsylvania, she says, “with insatiable curiosity.” She studied Chinese, dabbled in music composition, attended Oxford for a semester, and finally found her way to a newly formed major nicknamed “econometrics.” Studying under Thomas J. Sargent, a notable American economist and recent Nobel Prize winner, cemented Gail’s desire to pursue a career in finance. The freedom to experiment with different areas of study en route to finding this field gave her a deep appreciation for Penn’s approach to learning, and it inspired her to support the University in several ways after graduation.

Of the eight alumni funds launched after the initial AVG fund — Green D Ventures, a VC fund for Dartmouth grads — Chestnut Street had one of the fastest and most successful inaugural fund raises at that point in company history. A large factor in that success was Gail’s 30-plus years of fostering relationships with prospective Penn students, Penn alumni, and Penn faculty, as well as her previous leadership positions in University of Pennsylvania alumni organizations. In launching the fund, Gail simply reached out to the colleagues already in her social circle — CSV social events and information nights routinely get overbooked thanks to Gail’s long list of Penn-connected friends and associates.

Listen to this episode to learn more about Chestnut Street Ventures, to be introduced to three of the fund’s portfolio companies, and to hear Gail’s thoughts on the following topics:

1. The benefits to staying connected with former classmates

Though Gail initially stayed connected with her alma mater as a show of gratitude for the education she received, she also discovered that maintaining alumni relationships provided ongoing networking opportunities for her career. More than once, for example, Gail recruited a talented former Penn student to work in one of her organizations. Now, as Managing Partner in search of Penn-connected startups and investors, Gail believes that she has greater access to deal flow than would be the case if she had to cold-call her way to building the fund.

2. Why Penn alums should invest together

Generally, people involved in venture capital are high net-worth individuals who get deeply involved in the companies they fund. Because of the dollar amount and time required for this type of investment, relatively few people have historically been able to add VC to their portfolios. AVG has changed that by creating an opportunity for individuals to invest together — to pool their money — and follow lead investors who complete the bulk of the diligence, occupy board seats, and take on the majority of the financial burden.

As Gail says, “Our fund provides a simple, smart way to invest in an asset class that is generally not available to the investors individually.” Listen to the interview with Mike Collins if you want to learn more about how AVG is disrupting VC.

3. What it means to be “Penn-connected”

When Gail and CSV’s Investment Committee review business proposals, there are two “must-haves” in order for the team to consider making an investment. The first is that CSV will only follow a lead investor into a deal, as mentioned above. The second is that the team must be easily able to identify a Penn connection in the company. The Penn connection could be a founder who attended the University, a Penn alum who is part of the company’s original operating team, or a Penn alum who is an earlier investor — provided that he or she is still involved with the company and will be part of the fundraise that CSV is considering.

Lastly, Gail introduces three of CSV’s portfolio companies. First is Burrow, a direct-to-consumer couch that eliminates many pain points of furniture buying, founded by Stephen Kuhl and Kabeer Chopra while the pair attended The Wharton School together. Second is Shift, a company that is revolutionizing the used car buying process. CSV got introduced to Shift via the company’s CMO, Craig Isakow, a Wharton grad. The third company is Active Protective, a hip protection device for older adults made of wearable airbags. CSV got into this deal via a lead investor and an ongoing investor, both of whom are Penn ambassadors and graduates.

Gail’s devotion to Penn is clear and her enthusiasm for what she’s creating with her team at Chestnut Street is equally evident. This career crossroads is not just fun because she likes the space and enjoys the people. She genuinely believes that her business is providing a service that benefits the University as well as the school’s graduates. Gail says, “We are delivering something for alumni which, generally speaking, isn’t delivered by a university that is so well-focused on its students. We really have a great synergy with the work we’re doing and the work the university is doing.”

If you want insights into how Penn alumni are investing together, sign up for the Chestnut Street Ventures fund newsletter. You may also want to sign up for the Alumni Ventures Group newsletter to learn more about all of the alumni and focused funds at the company.

Founders and Funders is a podcast where we discuss how entrepreneurs and investors work together to build great companies. Our guests — many of whom are connected with AVG as entrepreneurs, investors, managing partners, fellows, and more — are invited here to talk about the journey of building companies from incubation to early stage investing and beyond.

As Principal at Chestnut Street Ventures, Jonathan Meltzer is responsible for sourcing, evaluating,...