Suzanne Biegel (founder of Catalyst at Large) joins Gail Gilbert Ball (Managing Partner of AVG Women’s Fund) to discuss how investors can back socially conscious entrepreneurs while making a profit. 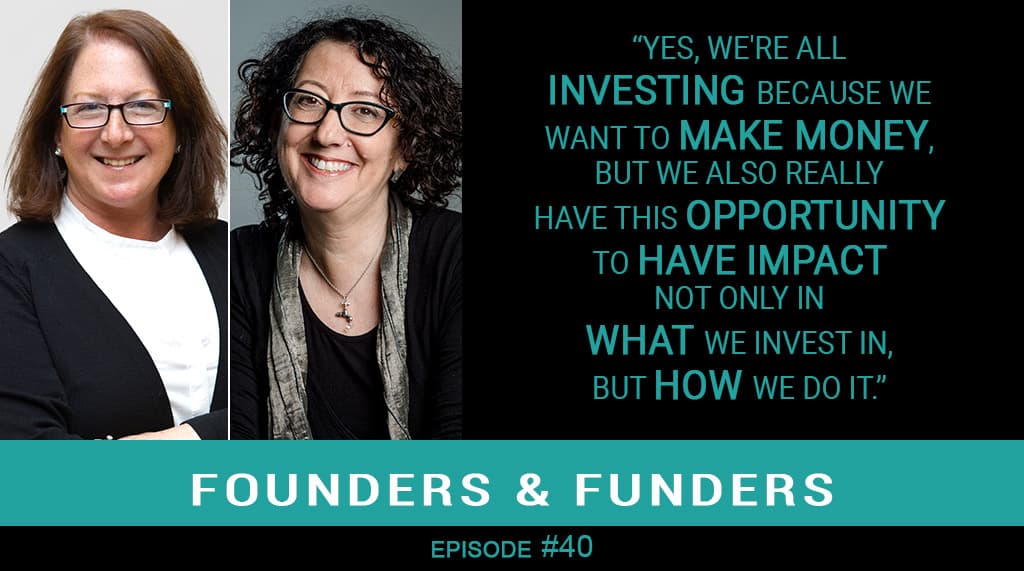 According to Suzanne Biegel and Gail Gilbert Ball, however, making an impact and uncovering financial opportunity involves much more than simply looking at who’s driving a company. Smart investors should analyze who’s sitting in leadership or governance positions, the company’s target audience, the value chain of the business, and how women are affected by the products and services being produced. Smart gender-smart investment demands a textured approach that increases the opportunity for every stakeholder involved.

Listen to this episode of Founders & Funders to learn more about why altruism is just one element of a discerning gender investment strategy. And subscribe to Founders & Funders on iTunes, TuneIn, Stitcher, Google Play, iHeartRADIO, and Android.

Suzanne Biegel, Founder and CEO of Catalyst at Large

Suzanne Biegel is the founder of Catalyst at Large and a global leader in gender-smart investing. She leverages her deep networks in finance, philanthropy, development, research, and entrepreneurship to connect public and private investors to the people and information they need to move their capital in a gender-smart way.

Biegel’s mission is to increase the flow of global capital to gender-smart investments and initiatives, to make sure this capital is used in ways that will generate the most impact, and to ensure that it reaches the entrepreneurs and innovators who need it in the most efficient way possible. She works with people who span the entire spectrum of investment to forge catalytic relationships, build collaboratives, and transform the entire system of global capital.

Her work has influenced hundreds of funds and institutional investors, enabling billions of dollars to move with a gender-smart lens.

Biegel began her career at IBM in the early 1980s and subsequently played pioneering roles in two IBM-funded startups. In the 1990s, she was the CEO of IEC, an education technology firm. Since exiting IEC in 2000, Suzanne has been an active angel and venture capital investor, philanthropist, and board member, and has played leadership roles in a variety of companies and projects.

Biegel is also a graduate of the Annenberg School of Communications and the Wharton School at the University of Pennsylvania. She is a dual citizen of the UK and United States. Biegel and Catalyst at Large are based in London.

Ball is a deeply experienced fintech executive with a long career in leading tech teams at global financial services firms. She has held decision-making posts at nearly every seat around the financial services table—banking executive, regulator, service provider, and board member—in both for-profit and social-impact markets.

Ball most recently served as a C-suite member of The Bancorp Bank, the innovative provider for the most recognizable names in digital banking. She also held executive roles at PNC Bank, Chase and Capital One, and NCO Financial Systems. Moreover, Ball headed the Payments Studies Group at the Richmond Fed and served as Board Member and Risk Committee Chair at Kompanion, one of Central Asia’s largest microfinance institutions.

She has a BS in Economics, Finance, and Statistics from the Wharton School of the University of Pennsylvania.

An actively-engaged UPenn alum, Ball previously appeared on the Founders & Funders podcast to discuss how UPenn Alumni are investing in VC.

At Alumni Ventures Group, we have an informal tagline of “better together.” This isn’t...

Between their initial seed round and preparing for an exit or IPO, successful companies regularly...

Venture capital moves at a breakneck pace. A single firm will meet with thousands of entrepreneurs...