How a Penn Senior is Cutting Down Food Waste, One Apple at a Time 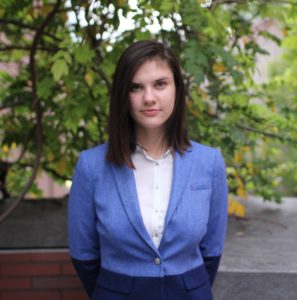 Food waste remains one of the world’s most pervasive issues. The USDA estimates 40% of food in the U.S. feeds landfills instead of people each year, a loss of roughly 133 billion pounds and $161 billion.

With Strella Biotech, Founder Katherine Sizov (C ’19) is aiming to reduce these figures with spoilage solutions for every step of the produce supply chain, from cold storage to local grocery stores. Since launching in 2017, the startup has drawn attention on campus and beyond, including an $100,000 President’s Innovation Prize awarded by Penn in April.

Sizov began working in biotech labs while in high school. Her love for science grew alongside a keen interest in entrepreneurship and social impact, laying the groundwork for Strella Biotech’s mission.

“My passion truly lies in application-based technologies ,” said Sizov. “I want to create products with my technical background that will solve problems for my community.”

Strella’s quest to address the food waste dilemma began with a familiar fruit: apples. According to Sizov, the average apple distributor loses about $1.8 million annually from food spoilage. This is primarily due to a lack of data on which apples are the ripest in their storage facilities.

Leveraging biosensing and IoT solutions, Strella developed a sensor that allows distributors to accurately monitor the maturity of their apples in real-time, helping to predict and prevent waste. Sensors are installed in cold rooms at packing facilities and connect to an intuitive user interface highlighting which apples are under-ripe, maturing, and ready for distribution.

“We create biosensing platforms that reduce food spoilage and optimize the supply chain,” said Sizov. “We utilize technology inspired by the living world to predict fruit maturity in the packing and distribution phase and spark actionable, data driven decisions.”

The sensor’s data is driven by tracking ethylene, a compound released by some varieties of fruit as they ripen. Sizov said Strella’s method is both more accurate and safer than common anti-ripening compounds, such as the synthetic chemical 1-MCP often used to mimic the effect of ethylene.

“Most man-made compounds can’t bind to fruit with the affinity necessary to predict such subtle changes in ethylene, a direct correlate of food ripening,” said Sizov. “Our sensors measure this exact gas and use it as an output for how ripe the fruit is.”

Sizov and her team of four classmates have built a strong foundation to engage with the $4 billion U.S. apple market. The majority of Strella’s $300,000 starting capital is equity-free through university funds, primarily from wins on the university startup competition circuit. In the last few months alone, Strella netted $100,000 each from the President’s Innovation Prize at Penn and Arizona State University’s Innovation Open. Sizov also presented successful pitches at the Penn Wharton Entrepreneurship’s Startup Showcase, Summer Venture Awards, and VIP-Xcelerate program.

A key driver of Strella’s early success is Penn’s “tight-knit entrepreneurship community,” according to Sizov. She highlighted the value of guidance from professors like Jeffrey Babin, Associate Director of Penn’s Engineering Entrepreneurship Program.

“The community of Penn professors on campus have mentored me in all aspects of my business,” said Sizov. “They are an invaluable source of information.”

Sizov has her sights set beyond Strella’s initial $621 million market opportunity goal with apple distribution. She said Strella’s sensors can be leveraged by supply chains for other fruit varieties, such as pears, kiwis, plums, bananas, melons, peaches, and tomatoes. The startup’s expansion plans aim to tap into a $1.2 billion share of the U.S. market and $5.1 billion of global markets.